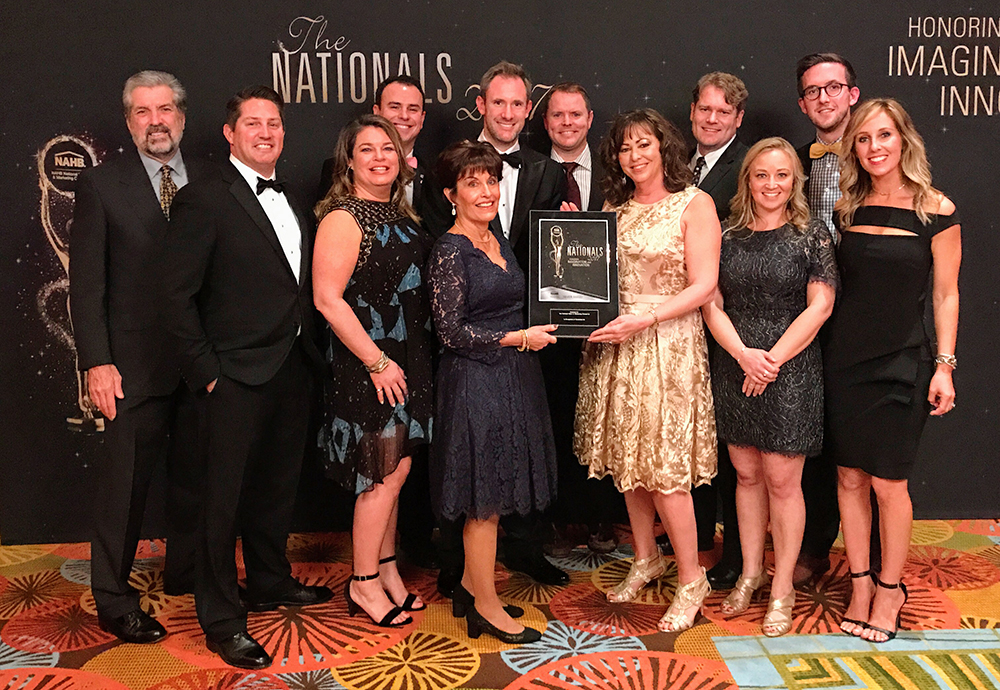 Midlothian, VA – Hallsley, a master planned community located in Chesterfield County, VA, continues to lay a foundation of success receiving the top national award from that National Association of Home Builders (NAHB) for “Best Master Planned Community of the Year.”

Members of East West Communities, the developer of Hallsley, were presented with the 2017 Best In American Living (BALA) “Platinum” award, their top national award, for Best Master Planned Community of the Year (over 100 homes). The national award was received on January 11 during the International Builders Show, which took place in Orlando, Florida.

The community also received three silver awards on January 10 during The Nationals, NAHB’s Sales and Marketing Council’s awards for the 2017 Master Planned Community of the Year, Best Landscape Design, and Best Video GoPro Tour (a self guided video of the Biringer Builders Homearama model home).

Winning a Platinum award from NAHB for Best Master Planned Community of the Year was no small feat as Hallsley was in competition with more than 1,000 other communities across North America.

“East West Communities is overwhelmed by these awards and recognition, but it wouldn’t have been possible without all the individuals who come together daily to help make Hallsley such a wonderful place to live,” said Kathy Pearson, COO and CFO East West Partners. “The success of Hallsley has surpassed our expectations and everyone else’s in the country.”

Another accolade for Hallsley came in December when DesignLens, a division of John Burns Real Estate Consulting, selected Hallsley as one of the two top master planned communities of the year. DesignLens researches nationwide for real estate industry innovators and trendsetters and selected Hallsley from the more than 100 communities they had visited in 2016.

Daniel Jones, East West Communities senior vice president and project manager for Hallsley said, “Hallsley deserves recognition on the national stage and it now has it. Receiving these awards is a testament to how hard everyone has worked to make this one of the best communities in the country. We’ve always said there’s something amazing happening at Hallsley and we’re excited that NAHB took notice.”

In 2016, Hallsley also received the Best Community Spirit silver award and a Special Award of Excellence from NAHB for its Massey Street of Hope luxury home show event, which raised more than $1 million for VCU Massey Cancer Center.

The company lead all other Richmond communities by selling the most new homes in the Richmond area (137) from September 30, 2015 through September 30, 2016, according to Integra Realty Resources-Richmond, a real estate advisory firm in Henrico County. Additionally, the community recorded the highest average price — nearly $656,000 — among the five top-selling communities and sold 50% of all new homes over $1 million in the greater Richmond area.

In 2015, Hallsley was named “Best Community in Richmond” by the Home Builders Association of Richmond and voted 2014, 2015, and 2016 “Best Community” by multiple media outlets in the Richmond area.

About Hallsley
Hallsley is conveniently located in Midlothian, VA, near the intersection of Route 60 and 288 – just 15 minutes from Short Pump and Stony Point, or 25 minutes from downtown Richmond. The community is known as a place where authentic American architecture is blended with the natural beauty of the land to create a place that is unlike any other in Richmond. Resort-like amenities include a clubhouse, a waterpark-style pool, a dog park, a treehouse playground, a playhouse village, a zip line, a Tom Sawyer’s fishing pond, tennis, volleyball, bocce ball, six miles of paved trails, 14 unique bridges, a chauffeured limousine van, pocket parks, and a full time Director of Fun. Hallsley is also close to quality schools, miles of nature-filled walking trails, access to major road systems, and thriving business and entertainment options. Find out more at Hallsley.com.